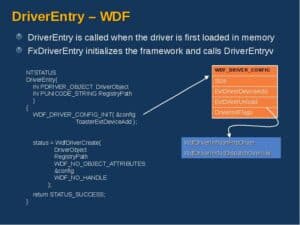 Standard driver routines can be divided into two groups: those that each kernel-mode driver must have, and those that are optional, depending on the driver type and location in the device stack.

By convention, the system-supplied drivers prepend an identifying, driver-specific or device-specific prefix to the name of every standard routine except DriverEntry. As an example, this documentation uses “DD”, as shown in the illustration in Introduction to Driver Objects. Following this convention makes it easier to debug and maintain drivers.